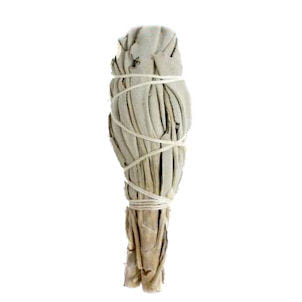 Add shipping to your order here

White Sage Smudge Sticks were traditionally used by Native American Indian cultures in spiritual ceremonial practices, the burning of the sticks is called 'smudging'. Sage smoke is used to clear negative energies from people, places, objects, spirits or influences. You can even use it to shift a mood!

Light the end of the sage stick by holding it to a candle, gently blow out the flame and keep the sage smoldering, direct the smoke around your home with your highest positive intentions- do this as often as you like to purify your surroundings.

On a conventional note, sage smoke releases large amounts of calming negative ions into the atmosphere, and has been scientifically proven to significantly reduce airborne bacteria.

Add shipping to your order here